We need to downvote more

DISCLAIMER: Allow me to begin with a caveat: SE users are free to vote however they please. The only 'official' criteria for voting on questions are:

And the only 'official' criterion for voting on answers is:

These are very subjective. I'm proposing that quite a bit of content doesn't meet these criteria and should be downvoted, especially that posted by new users to the site. With that said, users are free to vote however they please. This post is an attempt to persuade you to change your voting habits (i.e. downvote more), but this should be taken as one user's argument to do so, not as any sort of official guidance. Feel free to voice dissent (or agreement!) in answers to this post.

I recently proposed a new site on the SE network, and I was struck by this reminder: 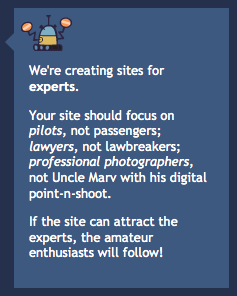 I sometimes wonder how often we lower the bar in the name of being welcoming, despite repeated exhortations to do otherwise. At the same time, we need to remain viable—but I don't believe that we should sacrifice quality for quantity.

I've addressed catering to experts before, but this is an encouragement towards specific action. I believe we need to see more downvotes here at BH.SE. We're doing a much better job than we used to with voting in general, and that's awesome (good job)!

However, the system works best when votes help filter the signal:noise ratio. I think there are some reasons why folks here tend to DV less than on other sites (based solely on my subjective judgment):

I'd like to address each of these objections to downvoting:

Downvoting is too harsh (or mean), especially when it's a new user

Suppose you're a new user and you ask a question or post an answer and get several upvotes. What's your initial impression? "Hey, my content is welcome here and people like it." Then all of a sudden, a few questions and/or answers later, you start getting more critical feedback and even attract a few downvotes. Now what are you thinking? "What has changed? Why is my content no longer acceptable?" Consistency is key here. It's important to uphold our standards and expectations right from the get-go. This will be slightly foreign to most religious practitioners—everyone will need a little adjustment. It's best to initiate this feedback immediately.

Concerning downvotes being harsh (or mean), it isn't personal (and votes are anonymous). Some types of content are more helpful than others. If all posts are upvoted despite varying levels of quality, the message is that they are all equally useful. And that's simply often not the case. Voting is not a popularity contest, it's a metric for evaluating content.

Downvoting should be reserved only for heinous or offensive content

In a neighborhood filled with homes, one house with a broken window is hardly an issue. But once you have several, trespasses will likely increase and bigger problems will begin occurring. The broken windows theory is "a criminological theory of the norm-setting and signaling effect of urban disorder and vandalism on additional crime and anti-social behavior. The theory states that maintaining and monitoring urban environments in a well-ordered condition may stop further vandalism and escalation into more serious crime."

A similar principle applies here: upvoting lots of mediocre, sub par content alongside expert-level content puts them on a level playing field and equally encourages both. This eventually causes the less useful content to increase, drowning out the expert material. We're not there yet, but we flirt with this path too often. Downvoting is a way of saying, this is not useful, we're looking for more. Upvotes should not be used merely as a reward for effort—the content should be of sufficient quality.

Downvoting should be a last resort

In theory, this isn't a bad approach. But in practice, what it usually translates to is inaction. I've said these things myself:

The problem is that we often forget to ever return to these posts, despite these users often never improving (many never even register their accounts). Or no one deals with the problem (this community is moderated by you—moderators are here to handle the exceptions—usually indicated by flags). The time to downvote sub par content is immediately. You can always reverse your downvote later if the user edits their post.

It's true that there is a one-point reputation deduction when you downvote answers. But downvoting questions is free! Jeff Atwood explains:

Downvotes give you the critically important ability to distinguish between the good, the bad, and the ugly. Without downvotes, how can you possibly tell the difference between a post that is harmless but uninteresting, and one that is actually wrong or harmful? Sure, it stings a bit to get downvoted. I’ve been downvoted myself on Stack Overflow. And each time, it makes me pause. But that’s good! That’s necessary! You have to believe there are potential consequences for every post you make — both good and bad. This is how things work on real playgrounds; why would we expect our web playgrounds to be any different?

The idea of a world where nobody can be downvoted strikes me as more than a little utopian. Is it realistic for users to expect to post in an environment where there are no penalties at all, no way for their peers to express disapproval or disagreement with their post? When you can’t leave a quiet, anonymous downvote, you’re more likely to post a snarky reply to express your displeasure. That’s why disallowing downvotes is actively harmful to community.

The problem isn’t downvotes, per se, but encouraging responsible downvoting. That’s why on Stack Overflow, we do it this way:

The trick here is that downvotes are mostly informational. The cost of a downvote to the users’ reputation (or karma in Slashdot/Reddit parlance) is quite low. It would take a whopping 5 downvotes to equal the effect of a single upvote. And, on top of that, downvotes cost you a tiny bit of reputation. The net effect is that you have to feel very strongly about something to downvote it. Downvotes are serious business, and not to be cast lightly. We designed our system around that maxim....

An environment where nobody has to feel the sting of a downvote is a laudable goal, and it’s certainly easy to implement. But is it real? Is it honest? The lack of a downvote removes far too much of the critical community feedback loop from the system. And in the longer term, that will do more to tear down your community than build it up.

I hope this has helped you realize that we need to downvote substandard content more. Content is not useful if it doesn't meet our guidelines. There are already websites for religious practitioners of Christianity and Judaism. We must cater to experts in biblical studies.

At the risk of challenging some well established SOP's, I have found the following:

1) "Who screens these calls, anyway?"(From CarTalk)

At the initial input level we are reminding 1st time and new users to "Read Site Directives". Coming from a "Forum" background(which way outnumber SE environs) is a difficult transition. This requires some patience and prudence(which people from Chicago aren't noted for) to re-direct their energies from verbal spews to thoughtful, insightful, critiqued answers. You don't get there overnight. Constructive criticism is helpful(I always post a comment on a negative vote). Some people get it, sharpen up their responses and deliver worthwhile answers. Others just look for another outlet to spew verbage; most of those never respond again.

2) Who are the Experts, anyway?

It has been my contention from Day 1 that the Academics(those that do this stuff for a living) aren't here. There may be a couple, but most of them have Peer Reviews, papers to write for various projects and really don't have the time or inclination to answer the germane questions posted here; much less ask a question. This site is more about Enthusiasts, who may have attended(or graduated) from bible school, divinity or other programs, who are bored out of their minds with JAVA or C++(what they do for a living) and are genuinely interested in discerning scriptural passages, and writing about their conclusions. Even the student traffic is small, compared to the dopes(like myself) who have a bible and know how to read. We get 'better' because we like what we're doing and don't have someone holding a gun(or a paycheck) over our heads to get it done.

I admit I downvote rarely. I also admit I comment frequently. Why?

There is no "win" or "lose" here; who's keeping score? It's how you respond that counts, and a UV or DV isn't the best indication of what a Good Answer brings. I used to DV answers that I fundamentally disagreed with, now I don't; in fact I have UV'd numerous answers that I have serious reservations with, why?

A thoughtful, insightful, critiqued answer doesn't always come from my particular persuasion. I may challenge the presuppositions that such an answer may be based on, but can applaud the effort one takes in arriving at such a conclusion. If I can say, "You have a point, based on your treatment of "X", but what about "Y"?", chances are they are going to get an UV.

What I reserve DV's for are answers like, "That's my opinion, so there." Or, after counseling someone to make an adjustment, they continue on in circular reasoning, supporting 1 false conclusion after another without regard for accuracy. DV to extinction is the preferred weapon of choice.

'Meh' answers are answers most likely given without a lot of clarity and preparation; they answer the question but are short on specifics or insight. Yeah, I could DV these but I would wake up with cold sweats with visions of Mrs. Pruneface and her horned-rim glasses saying,"Don't you know what dangling a participle is?" "Meh" answers are just that, attempts by individuals to post an answer that somehow got sidetracked(maybe the boss heard your keyboard rattle and thought you were cranking out code). I leave them alone, and sleep without feeling the saliva spray from Mrs. Pruneface.

In Summary, these items capture the majority of reasons why I do(or don't) DV.

Not the answer you're looking for? Browse other questions tagged discussion voting .

21
How can we educate new users about our site distinctives?
15
How can we attract high-quality Biblical scholars and still be welcoming to interested amateurs?
12
Is the recent Stack Overflow initiative worth considering for BH?
10
On the value of VTDs
13
A helpful flowchart for asking questions on BH.SE
2
Marking answers down
0
Who is responsible for the anonymous yellow box messages?
-8
Why aren't downvotes removed when the reason for giving them no longer exists?

9
A roadmap to Biblical Studies
9
All traditions are welcome on Biblical Hermeneutics
1
Is a post considered to be an answer if it focuses primarily on the application of the text (as defined)?
5
Should I downvote as well as upvote on meta?
1
What if the Q&A process were prompted for new users up to a certain number of rep points
10
On the value of VTDs
8
What is the Anatomy of a Good BH.SE Answer?
9
Is the unofficial welcome message unique to hermeneutics.stackexchange.com
6
What should I do with my reputation?