This question currently has two entirely different answers. One is from a general hermeneutical approach, and the other from a specifically Jewish Rabbinical interpretation.

I have no particular objection to either, but I can also see no way that they can be reconciled. The objective of this site is to provide a single best answer for each question. Is this kind of question a problem for us? If so, how can we deal with it?

EDIT:It was questioned whether SE sites were intended to provide a 'single answer'. I didn't mean that there should be only one answer, but that strongly built in was the concept of the 'best answer'. That's why we have accepted answers. In this case there can be no 'best answer'; just two answers starting from entirely different viewpoints.

The objective of this site is to provide a single definitive answer for each question.

I would strongly disagree with this statement. The purpose of this site is to ask and answer questions. Often times there are multiple answers to a single question. Often times each answer provides only part of the answer to the question. Sometimes (like this), a question will spawn answers from multiple viewpoints. Each of these must be accepted as valid, providing they are valid.

If you take a look at Area 51, you'll see this statement:

2.5 answers per question is good, only 1 answer per question needs some work. In a healthy site, questions receive multiple answers and the best answer is voted to the top.

The idea is that you want an average of 2-3 answers per question. Although this doesn't say 2-3 valid answers, that can be assumed.

I don't think that we need to reconcile the Jewish and multiple Christian perspectives. Each perspective should be able to stand on its own and should be supported by its own hermeneutics and doctrinal exegesis.

I don't think this issue has gone away and we continually struggle as a community to maintain ourselves as a welcoming place to understand the biblical texts. I thoroughly agree with Richard; his answer applies as well now as it did then. But after almost a year of experience, I believe the tension runs deeper.

My name is Ozymandias, king of kings:
Look on my works, ye Mighty, and despair!

If, as the text states, the author is "Ozymandias, king of kings", the lines are a boast making reference to his monuments. But if the author is Percy Bysshe Shelley, who was inspired by this statute: 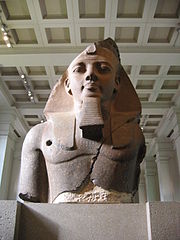 the text has a somewhat different meaning. In perfect irony, the words mean exactly the opposite of their surface meaning. (And let's put aside the significance the words might have in the thoughts of the reader.) It's clear that the best interpretation of the poem will consider the meaning in light of both authors; considering just one or the other will result in an impoverished answer.

There are lots of theories about who wrote the first book or the Torah:

Now consider that these theories can be mixed and matched in virtually every single permutation and it becomes clear that no one answer to a question about a Genesis text can cover all the angles. Further, an answer that attempts such a thing will almost certainly fail to cover each position with the vigor and correctness it deserves.

To further complicate things, our site explicitly welcomes all viewpoints. We don't take a position on which, if any, God was an author of Genesis. We can't reject out of hand either the Mosaic hypothesis or the documentary hypothesis (to say nothing of the Wiseman hypothesis). Answers from all sides must be allowed to coexist here—even if they violently contradict each other.

Fortunately, for a great many questions, the answers will not change significantly if one presumed author is substituted for another. That's why we can say things like "David writes in Psalm 23..." without (much) controversy. If you think it unlikely David wrote the Psalm, you can think of "David" as a useful, if fanciful, label for the psalmist. It would probably be more in keeping with the spirit of the site to say "the author" or "the psalmist", but it usually doesn't make any difference to anyone.

For questions where authorship (or more generally, doctrine) matters, the Stack Exchange Way™ is to encourage multiple answers and let voting sort it out. To paraphrase Jeff:

This is the scary part, the great leap of faith that Biblical Hermeneutics—Stack Exchange is predicated on: trusting your fellow exegetes.

Ok, that's not terribly elegant. But the point is, we need to trust that voting will sort things out to help us divide community-approved answers from divisive answers. Unfortunately, we can't trust all the voters all the time. (To say nothing of the special "Accept" vote that is only available to the person who asked the question. But I'm planning to address this in another meta-question soon.) The fact is, even if we had a standard for voting, we can't enforce it and most voters won't read it. There's a serious possibility that one theory of the text will be selected by the votes purely because it's the most popular. Other sites have this problem too.

Therefore, let us take on this motto in our answers:

I have become all things to all people.—1st Corinthians 9:22b (ESV)

Let us not say things that we know others must disagree with when we can just as easily communicate the same message in a way that nobody can object too. If you know or find out, that another hermeneutical approach rejects something you've said, reword it so that it is objectively true. Change, "X is true" into "according to Y, X is true". Y doesn't even have to be an important scholar or universal authority; Y could be you!

No Really, So What?

Well, for one thing, consider providing an alternate answer. You can't very well complain that your hermeneutical approach is unfairly ignored if there isn't a positive statement of it in another answer.

Second, if anything on the site appears unwelcoming to you or to people you hope will participate more, raise the issue via votes, comments, edits, flags, meta-posts, chat, etc. I'm personally committed to making this site as level a playing field as possible. (Don't take this too far the other way, however. We ought not strong arm others into doing things they refuse to do.)

Third, be patient. The ideal solution is for voting to sort these things out, but voting can take a long time. I know it can be hard to trust each other and trusting the people who will find the site in the future is even harder. But ultimately, this entire endeavour is built on trust.

13
What does a vote mean on the Biblical Hermeneutics Stack Exchange?

6
What is a good source?
0
Please create a "hermeneutics" tag
4
Clarification on Questions About the Original Languages Without Seeking to Understand a Specific Text
8
What is the Anatomy of a Good BH.SE Answer?
0
Should Hermeneutics Stack Exchange have a Section for the Protestant Faith Only?
2
Defining site tag use and refinement: History tag
1
Why is this question Too Broad?
1
I wasn't able to find in the on-topic page what exactly this site is about in terms of what are the rules in answering questions
0
This looks like a well-masked theological question