How is this an "exact duplicate"?

A question appeared today, Adam and Eve: Significance of the Tree of the Knowledge of Good and Evil?

It was marked by 5 users as an "exact duplicate" of the question Could the “tree of knowledge of good and evil” mean “tree of intelligence”?.

Is there any possibility that the tree in the middle of the garden was able to make man intelligent?

If so, could it mean that God did not create men to have creativity, intelligence, innovations, explorations and discoveries, but after eating the fruit they got all this knowledge and abilities?

... that making judgement calls regarding what is good or evil was never meant for man

I am really struggling to see how these are exact duplicates. The former question deals primarily with reason and science, the latter with moral discernment. The latter question was not well formed and needed some work, but it was the user's first post. It seems that maybe we were a little dismissive here.

I've seen quite a few questions like this being flagged for being exact duplicates, where they really aren't.

It may or may not be an exact duplicate, but that isn't the point. In fact 3 out of 4 places the status is noted don't even include that wording. 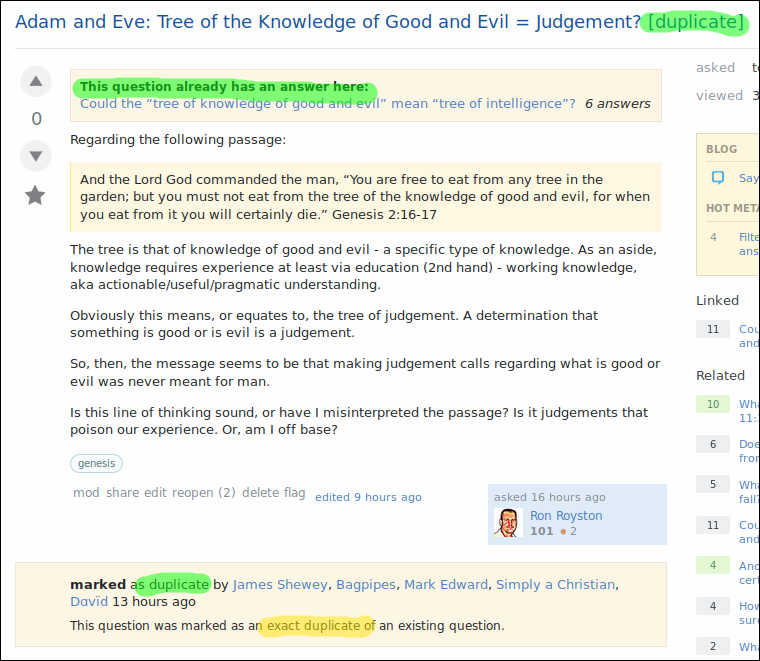 I would argue that wording is not important, the basic idea is the same and no cookie-cutter message you put is going to cover all the bases across SE sites. For our purposes, questions with substantial overlap in scope tend to detract from the quality and depth of answers. Having people concentrate on really in depth answers is preferable on this site to repeating the same general content over and over.

In the event questions do really differ in what content would end up answering them, the thing to do is edit them to be more narrowly scoped to just the part of the question that differs from the existing question. If a new question covers a chuck of ground covered by something else it should be edited to be well formed and focus on just the new aspect of the question before being re-opened. This will encourage the best answers and make the best use of the time and effort invested by answerers.

Since I initially nominated this question for closure and highlighted "Could the "tree of knowledge of good and evil" mean "tree of intelligence"?" as the duplicate, I will provide my logic for doing so.

While, as Caleb highlighted, neither of the questions are exact duplicates, this is simply because both questions are poorly worded (ideally, it should be "what was the purpose and meaning of the tree.") The shortest answers to either of these questions are either "No" or "Yes". In the former case, a one word answer is not acceptable due to the scholarship requirements on this site. As such, if the short answer is "no" it is the duty of the answerer to provide and support a theory of, if the tree doesn't mean (tree of intelligence / tree of judgement), just what exactly the tree does mean. As you can see, those answers will be exact duplicates. In the event that the answer to one of these questions is "yes", then again, they are still duplicates, meaning that in every scenario, the answers will be exact duplicates for both questions, even if the questions themselves are not the same due to their poor phrasing.

21
How can we educate new users about our site distinctives?
12
What does "show your work" mean in the context of exegesis?
0
An "exact duplicate" does not seem to be an exact duplicate

1
Can I ask this question on 1 Timothy 2:12-15
15
Why Biblical Hermeneutics isn't closing
4
Is this site helpful?
5
Is there a policy for providing an answer that supplements a good answer already posted?
1
Is a post considered to be an answer if it focuses primarily on the application of the text (as defined)?
2
Why was my question about Source Criticism and the Doctrine of Atonement deleted?
0
An "exact duplicate" does not seem to be an exact duplicate
3
Why is this question poorly received?
1
How to ask a question about the first seal in Revelation 6?
1
What are the overarching tagging principles we want to apply here?