Is “ANLEX” a legitimate abbreviation to use on this site?

I've asked the good doctor to please not use "ANLEX" in posts as if people will know what he's talking about because:

Why did Jude use the word “common” to describe salvation in Jude 1:3?

Can you please advise as to whether the use of this abbreviation (without identifying what it means and to which analytical lexicon he's referring) is, as I've suggested, inappropriate?

Actually, even if he explains what it means it is inappropriate!

I've added my £0.02 as a comment on the first occurrence of this practice. Since comments on this site can (and often should) be ephemeral, I record it here for posterity:

As has been pointed out on Meta, writing things such as "According to most Greek dictionaries, eg, ANLEX,..." is simply gibberish, and in this case nonsensical: "ANLEX" is not an example of a "Greek dictionary". Please be specific when citing Greek dictionaries: LSJ? BAGD? These are known quantities and can be checked. "ANLEX" is meaningless.

The thing is, in the ten answers that use "ANLEX" (as I type), only one uses the "analytical lexicon" for its intended purpose: to identify grammatical forms.

There are, as OP indicates above, a few examples of this kind of lexicon on the market. (Our "ANLEX" user appears to be using the Logos version of Friberg, Friberg & Miller's.) There is a venerable tradition of such volumes, with the one I know as "Bagster's" being a representative of the genre from the 1870s or so: 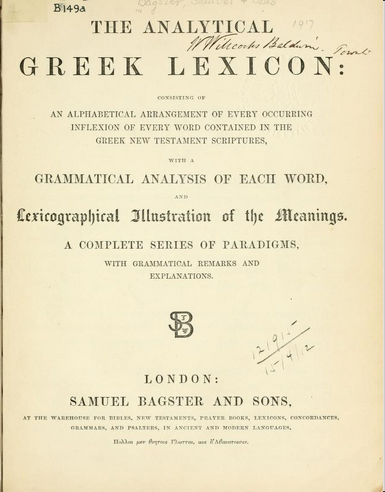 Its preface makes clear what makes this an analytical lexicon:

But its distinctive feature consists in an Alphabetical Arrangement of every occurring inflexion of every word. Each form is exactly named, and referred to its root; — the whole thus forming a precise analysis of the entire verbal contents of the New Testament.

In other words, its main interest is in morphological analysis, and not semantic nuance. These "analytical lexica" are thus quite limited for semantic information; their goal rather is to clarify the grammatical analysis of forms.

As I say, only once (that I can see) is "ANLEX" invoked to this purpose in the posts I have surveyed. Otherwise, it is appealed to for semantic distinctions. Here, of course, other lexica (BAGD in particular) are the appropriate reference works to appeal to. So these "ANLEX" posts fall foul of the same kind of category mistake that was identified a few years ago on this site for the (mis-)use of concordances.

Hopefully, "ANLEX" will disappear from these posts, replaced by appropriate and transparent references/citations to the source being used.

I agree with Dɑvïd's twopence. Here is some spare change from a moderator's perspective:

Thank you for your observation. I don't think your advise is inappropriate. When abbreviation is used in a post without identifying what it means and to which analytical lexicon it is implied, intended answers become evasive.

When I saw “ANLEX” on a post while I was seeking for clarification on the question: Why did Jude use the word “common” to describe salvation in Jude 1:3? , I was dumbstruck. I became so confused and started feeling like the Sea mist was rising to paint my face and left beside myself in the directionless. I wasn't even disposed to seeking for the meaning of "ANLEX" because I am new on this site and have yet to fully understand the codes of conduct. I want to thank you, the moderator, for raising this issue and for speaking kindly to the good doctor about it.

22
Strong's is a concordance, not a lexicon