What is the schedule for voting in new moderators?

Is there a schedule posted somewhere? When is the next election?

SE started to Experimenting with Pro Tempore elections. To put it simply, beta sites are now possible to have an election.

One idea that some of us on the community team considered is holding regularly scheduled elections. After the first election, incumbent moderators would have the option to continue in the position without facing reelection. But if one or more moderators decide to step down, we'd run an election to replace them. Meanwhile, if the moderator team needs extra help, we could run an election to add a member to the team. (Also, both situations could be handled at the same time.) If there is neither a need for an additional nor a replacement moderator, the election wouldn't be run.

Clarification note: Unlike presidential election, SE moderators are elected for life until they step down (or forced to step down if SE considered them problematic). Even if there's an election, existing moderators that don't intend to step down won't be replaced by new candidates.

Moderators on a beta site like BH.SE (aka "Pro Tem Moderators") are not elected but appointed. They generally serve until the site graduates or until they choose to step down:

Appointing Pro Tem Moderators — A few weeks after launch, we start the search for “pro tem moderators” who will watch over the site prior to the general elections (when the site graduates). This process may take awhile depending on how clearly candidates emerge from the early community, and how amenable they are to taking on that role. We try to appoint three candidates in the first round, but we may start with fewer and appoint the rest as soon as we can if the process drags on too long.

Moderators are elected by the community after 'graduation' of the site from the beta phase. This used to be decided in an ad-hoc way but more recently there has been a general rule that a site needs 10 questions per day before it will be considered for graduation:

…from now on, when a site starts to consistently receive ten new questions every day, we'll consider it for graduation.

…although there is the following caveat:

This is not 100% automated; CMs will still be manually checking on how individual communities are doing, and some sites might still graduate "earlier" or "later" than their question activity alone would suggest; but it's an effective rule of thumb.

You can keep track of progress on the Area 51 page: 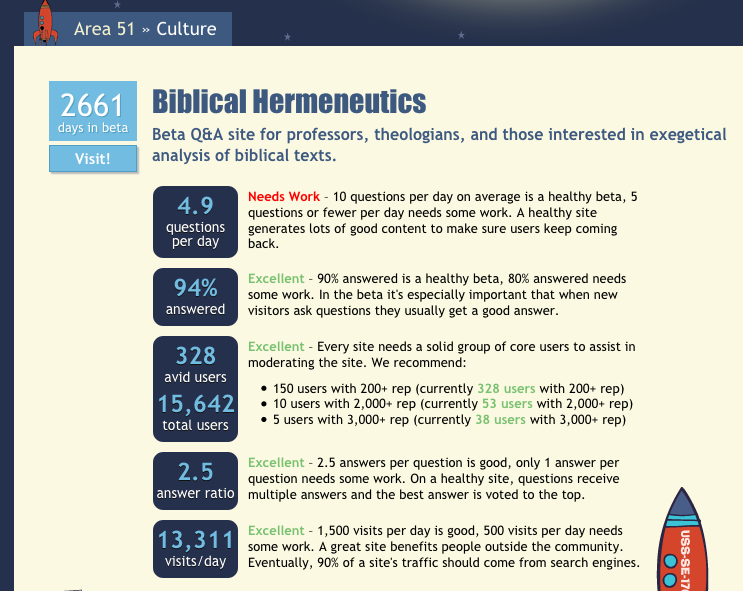 …or using data.stackexchange.com as I've done with this query:

Not the answer you're looking for? Browse other questions tagged support .

7
Can you supply me with links for new members?
2
Reason for removal of a post
6
How long does the site save an unfinished answer?
3
Can new account be merged with old (deleted) account?
2
100 Rep for a 'new user'?
2
What tag should I use if my question is about verse placement in English translations, not the translations themselves?
2
How can I use upvotes and downvotes to determine how to improve my questions and answers
0
Put Answer poster name at top instead of (or as well as) bottom
2
Is there such thing as too many questions?