Who/what is the Community Bot and why does it persist in deleting a question on the false premise that it's duplicate?

I'm still learning some of the ropes here, obviously, having been a member here only a few months. In any case, I was just reviewing some details from my user page, and found the following oddity.

What are the biblical metaphors for the local church? [duplicate] asked May 31 '12 at 9:55 by David Laberge

This question has supposedly been merged, and is no longer answerable, but the question to which it was merged has been deleted, making this one a vestigial remnant. It appears the best course would be to reopen this one. – Polyhat Aug 8 at 13:30 helpful

I didn't even know, at the time, that my flag would be classified as either helpful or not--but it shows up in the log as "helpful." So, I just now clicked it to see if it had been reopened. It hadn't. But wait! ... Then I saw this:

This post is hidden. It was automatically deleted 2 months ago by CommunityBot.

I followed the link that was still in that post, and it still leads to a dead-end post that was deleted long ago. So why was this post deleted, and why 2 months ago?

I hovered over the "2 months" and was able to ascertain that it had been deleted on August 14. I had flagged it on August 8. That means that for a short time, depending when it was undeleted, it had been opened, presumably by a moderator, after which this "Community Bot" had automatically? deleted it again.

How is it that the "Community Bot" is able to work counterproductively in a case like this? How could the question be reopened without triggering its ire?

For obvious reasons, I didn't see fit just to flag it again--there's little point in reopening it if the Bot will just close it again. I do think, however, that it deserves to be reopened, as it definitely does not get "duplicated" by the answer to which it is presently linked.

Thanks for the question! The post you've linked is marked as [duplicate], and as you identified was merged into an exact duplicate question. It looks like the OP posted one copy on BH.SE, and another on Christianity.SE, which was later migrated over here as it was believed to be closer to our scope than theirs. As the Christianity.SE copy was 'busier', a Moderator chose to merge the less active copy into the migrated copy. But two days later, the OP then deleted it, for reasons unknown:

This left the merged [duplicate] Question as the only publicly visible copy of it, and it remained [locked] on the site until now. When your new flag was processed, the duplicate was [unlocked].

What is the Community Bot?

Site administration is a big task, and so there are lots of different administrative layers to make that task more manageable. The Community Bot is a script which routinely checks questions on every SE site against some strict criteria which indicate that some kind of housekeeping is required.

Locked content is usually protected against this type of housekeeping, which is why this negatively rated question with no answers survived so long. A few days after you had the question unlocked, the Community Bot cleaned it up as a [Dead Question] a few days later when it matched its cleanup criteria, which are described over in this Meta.SE post:

It wouldn't belong here either way

If it had not been deleted by the Community Bot, this question would have been Closed as Off-Topic for BH.SE, and could have been closed under several of the Close Reasons - most appropriately the third site-specific reason, "Questions searching for a text are off-topic".

I wasn't personally here in 2012, but the on-topic guidelines were refined significantly between then and now - particularly in 2015, where the current Close reasons were formalised by community consensus. The site was in 'Beta' for a very long time, and it took a few years for the topic and close reasons to become clearly defined and tested. Certainly since 2015 all questions of this type would be quickly closed as off-topic, and before that point there appears to have been a community consensus that these types of questions were not a good fit for the site. 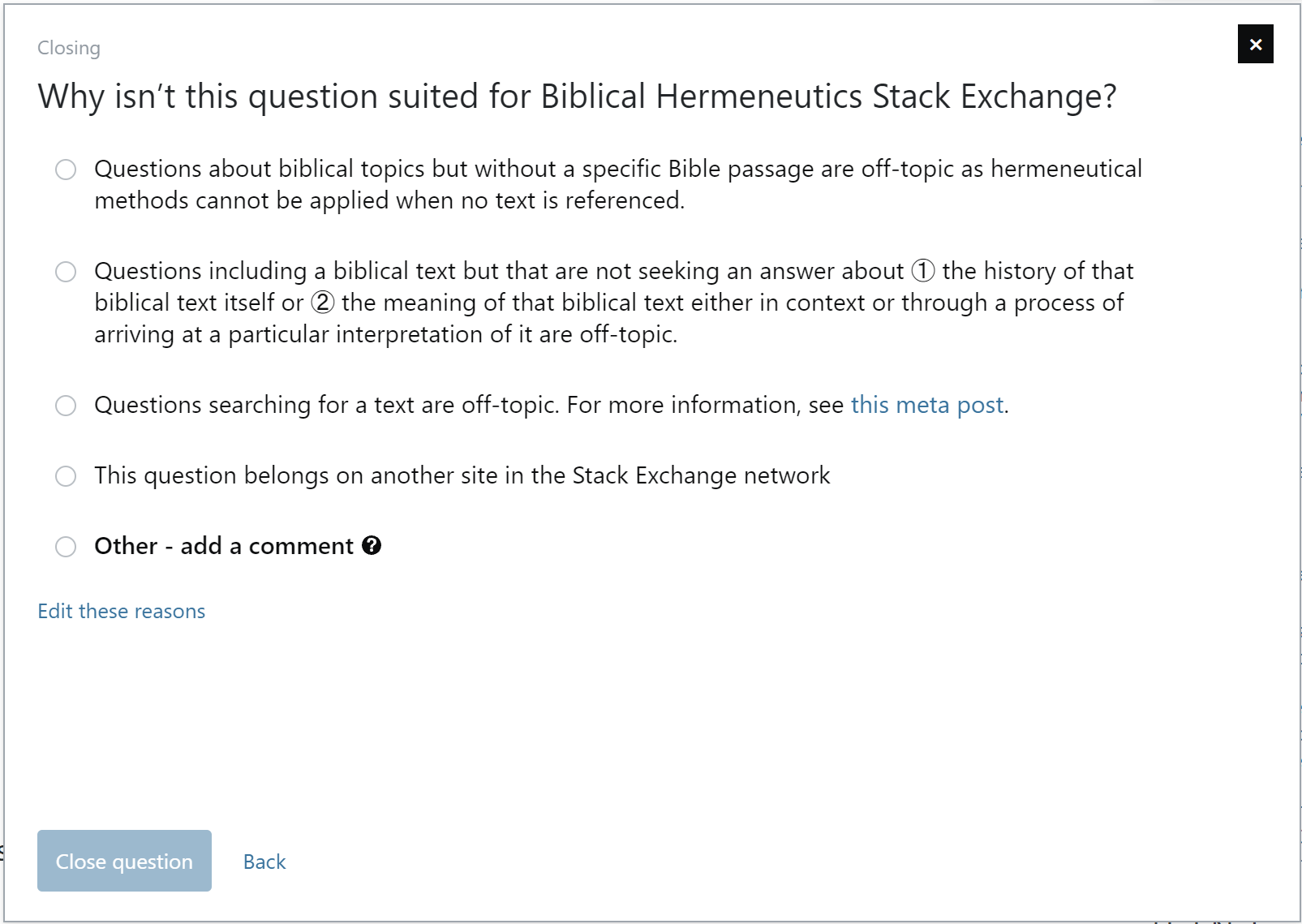 This is why we would encourage all experienced users to make use of the Close Votes queue, as this is a great way to practice applying the on-topic guidelines to a range of questions and develop your own understanding of the SE's scope.

StackExchange sites each have their own unique scope which is gradually shaped by their community over time to ensure Questions are clear and answerable, and also in response to the scope of 'neighbouring' SE sites, which in our cases are mainly Christianity.SE, Judaism.SE and Latin.SE.

Not the answer you're looking for? Browse other questions tagged bug duplicate-questions community-bot .

5
Where does the "Ask Question" title prompt come from? Can we change it? To what?